Jarrell Miller tried to get Anthony Joshua “rattled” as he wants the world heavyweight champion to fight like a “maniac” in New York, says promoter Eddie Hearn.

The unified title holder was shoved by Miller at the start of their first press conference to announce Joshua’s US debut against ‘Big Baby’ at Madison Square Garden on June 1, live on Sky Sports Box Office.

‘Big Baby’ Miller then directed a tirade of insults at Joshua, who responded with heated words, and Matchroom Boxing boss Hearn believes the Brooklyn man is trying to set the scene for a reckless battle. 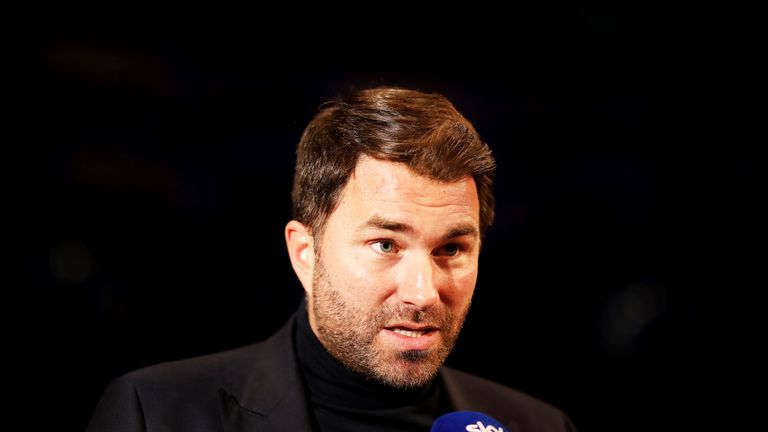 “I think it’s a ploy. I think it’s probably a smart one,” Hearn told Sky Sports. “Not overly tactical, but a ploy to get Anthony rattled, to get him to come to fight.

“We saw it, Dillian Whyte did the same thing in their fight. I know Anthony won that fight, but he was rattled, he fought like a maniac in that fight, and I think that’s what Jarrell wants.

Both fighters will be reunited in front of the media on British soil on Monday, with Hearn admitting that he can do little to prevent Miller from repeating his intimidation tactics.

“There’s not a lot you can say to them,” said Hearn. “They don’t really listen to people like us. When you say ‘look guys, nice and calm’, it doesn’t really come into it.

“Jarrell Miller is a guy who has come from a very, very underprivileged background, who grew up in Brooklyn, who’s got a chance to win the world heavyweight championship in New York at Madison Square Garden.

“AJ has got to come to his backyard, silence him, and knock him out.