Federer set to break own record

Roger Federer says he won’t be thinking about setting a new Wimbledon record when he takes on Kevin Anderson in the quarter-finals on Wednesday.

The top seed eased to a 6-0 7-5 6-4 victory against Adrian Mannarino in the fourth round to extend his run of consecutive sets won at the All England Club to 32.

Federer achieved that feat in 2005 and 2006 – when he won his third and fourth Wimbledon crowns – and the Swiss great can top it with a straight-sets win against Anderson.

“I feel like these streaks just happen,” Federer said. “You can’t plan for them anyway because one point can change the outcome of a set.

“Of course, if you give yourself maximum chances, you’re playing well, you have super focus, then these streaks are kind of possible.

“I’m equally happy if I would have won all the matches in four sets. That it happened to be in straights, it helps me for the season and to save energy for the rest of the tournament.

“I don’t think it’s something anybody aims for, to win every match in straight sets. It’s like today, I hope I get off to a good start, go from there.

Federer lost a mere five points in the 16-minute opening set against Mannarino on Centre Court and saved his first break point of this year’s Championships with an ace.

Mannarino, world No 26, upped his level in the following two sets and had three break-point opportunities during the third set but saved them all before breaking and serving out for victory.

Federer admitted he was surprised by the quick nature of the first set, which kick-started his progress to a 16th Wimbledon quarter-final. 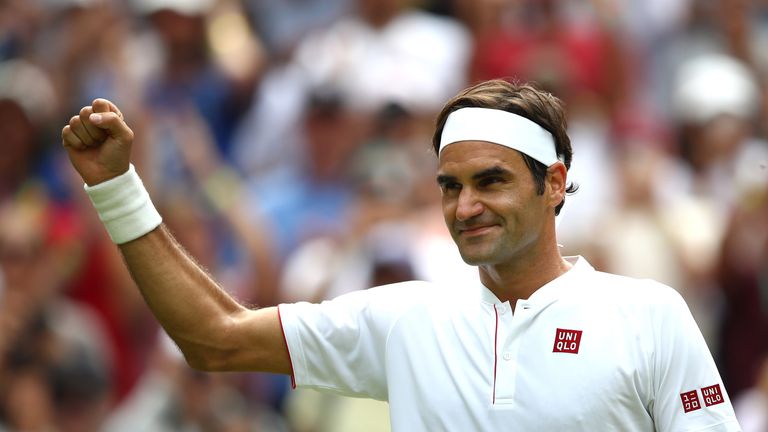 I told my team the other day that for me also, after all these years, it is surprising to be the number one seed, in the top two in the rankings at 36. I didn’t think that was ever going to happen.

Federer said: “I told my team the other day that for me also, after all these years, it is surprising to be the No 1 seed, in the top two in the rankings at 36. I didn’t think that was ever going to happen.

“That sometimes there is a set like this against a player who is not the biggest server, it can happen. Then he showed that he is top 30 after all, he played two good sets after that.

“I was also surprised the first set was so fast, especially 16 minutes. That was too fast. Shouldn’t really happen, but thankfully they do for me. I probably won’t have another 6-0 set this week, so I’ll enjoy this one.”

Much has been made of the likelihood the Wimbledon men’s singles final will clash with the World Cup final in Russia, unless there is a quick encounter, but Federer is not worried by the showpiece occasions taking place simultaneously.

“I’m more concerned the World Cup final will have issues because the Wimbledon final is going on,” Federer joked.

“They’ll hear every point, Wow, love-15, 15-30. The players are going to look up in the crowd and not understand what’s going on at Wimbledon.

“That’s how important Wimbledon is to me and to us over here. Maybe you should ask the questions over in Russia, how they’re going to feel about Wimbledon being played at the same time.”

We have Wimbledon covered from all angles via our website skysports.com/tennis then click through to our dedicated section skysports.com/tennis/wimbledon. On the move? Head to our app for mobile devices and iPad, or follow our Twitter account @SkySportsTennis to join in the conversation.

We will have news, previews, live blogs, reports and expert analysis from Wimbledon. On the move? Head to our app for mobile devices and iPad, or follow our Twitter account @SkySportsTennis to join in the conversation.

Our next tennis action comes from the German Open in Hamburg. Watch the action live on Sky Sports Arena from Monday, July 23 from 10am.

Never miss the big kick-off or have to deal with interrupted games or low-quality streams with a NOW TV Sky Sports Pass this summer. You’ll get exclusive coverage of the 147th Open from Carnoustie, The Ryder Cup, ATP Tour, World Darts Matchplay, and loads more starting from just £7.99. No contract.