“If it is Povetkin, it will be in September, that’s for sure, and then we fight Wilder straight after if he signs a contract,” says Hearn

Promoter Eddie Hearn fears Deontay Wilder is playing a “big game” and will press ahead with Anthony Joshua’s WBA title fight against Alexander Povetkin in September.

The WBA have ordered Joshua to sign for a WBA mandatory title defence against Povetkin “within 24 hours” as WBC champion Wilder has yet to agree a unification fight with the British heavyweight star, despite lengthy negotiations.

Matchroom Boxing boss Hearn admits Joshua remains keen to battle Wilder for all the world heavyweight belts, but revealed how talks were further delayed this week as he awaited a response to the fight contract.

“I think they have just said enough is enough,” said Hearn, when asked about the WBA ruling.

“We need to know what you’re doing, you’re mandated to fight Alexander Povektin, and I think Povetkin’s people are getting extremely restless as well.

“They have been waiting and to be fair to them, they have been patient, but [WBA president] Gilberto Mendoza has clearly decided enough is enough and we’ve got to move. 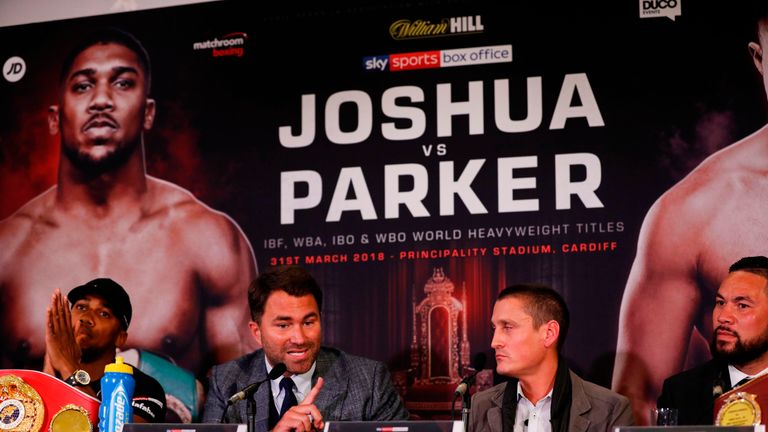 They know we’re under pressure from the WBA and it all feels like a big game, to be honest with you.

“He [Joshua] knows that Povetkin is an extremely tough fight. Deontay Wilder is another fight that he wants badly. We can’t do a lot more than we’re doing. I think Anthony is frustrated that he feels, people feel he might not want this fight. He wants that fight more than anything.

“We sent the contract nearly nine days ago now. We’re not even necessarily expecting a signed contract back. We just want your comments. If my fighter wanted a fight, and we received a contract, I would be back with the comments within 24 hours.

“Nothing makes sense here at all. They emailed me on Sunday and said we would be back with our comments on Friday. Why do you need another five or six days? They know we’re under pressure from the WBA and it all feels like a big game, to be honest with you.

“It’s very, very frustrating and right now it looks like Povetkin is next.”

Hearn admits the continued speculation about a fight with Wilder could be a worrying distraction for Joshua ahead of a title defence against Povektin, who delivered a chilling knockout of David Price in March.

He said: “The Wilder fight may even be signed before we get in the ring with Alexander Povetkin, so for Joshua, there is massive pressure and like I said, Povetkin has just one defeat – a points loss to Wladimir Klitschko. A very, very tough, experienced man.

“The important thing for us is to maintain the belts and not be disrupted by people playing games or people who want to mess us about, because we’re not going to allow that to happen to Anthony Joshua’s career.

“If it is Alexander Povetkin, it will be in September, that’s for sure, and then we fight Wilder straight after, if he signs a contract.

“But the way they are going at the moment, I can’t tell you whether this contract gets signed in 10 days or 10 years.”